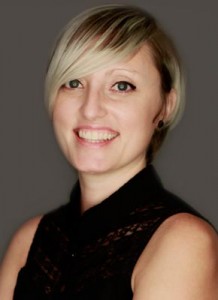 Jessica was born and raised in western Kansas. She is proud of her upbringing and attributes her hunger for creativity to it.

After receiving her BFA in Graphic Design from Fort Hays State University, she packed two bags and headed to New York City. Once the initial culture shock wore off, she started freelancing. Soon she found a position at an online magazine called 26Reds, where she wrote reviews on music and other facets of pop culture. It was during this time that she also landed a freelance position at Great Works, a small Swedish-based agency. There, she learned the inner workings of small agency life and met some incredibly talented individuals in the process.

Through the power of networking, Jessica joined the team at Kay & Black in 2007. Kay & Black specializes in connecting all levels of creative talent with great agencies nationwide. These agencies range from small boutique shops to the larger global entities with everything in between. If you’re a creative in advertising, we’d love to work with you. Our talent pool consists of art directors, copywriters, designers, producers, strategists, and more. Our goal is to place talent in an agency where both parties become better as a result.

In 2013, Jessica relocated to Austin, TX to start the southwest branch of Kay & Black where she continues the creative quest.

Jessica still continues to design on the side everything from logos to album covers and beyond. She also enjoys live music, being outdoors, laughing, tacos (breakfast or otherwise), and that sweet nectar known as Dr. Pepper.

We are passionate about building relationships driven by creativity and trust, and we are excited to partner with you.