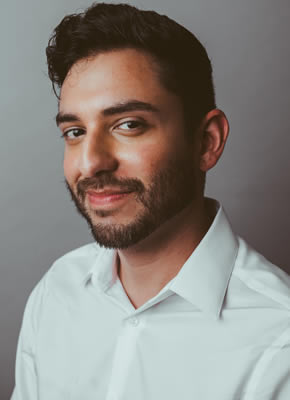 A graduate from the University of Pennsylvania, Jeffrey impresses out the gate by speaking three languages fluently-English, Spanish, French and although a bit rusty- Russian as well!

But that’s not what we find so amazing about him; professionally, he spent the last 10 years managing teams, improving operations and working closely with the Philadelphia community. Before switching from government to advertising, he learned how much he loves advocating for others in both career and life. At his prior job working for the Commonwealth of Pennsylvania, he worked directly with the Latinx and Algerian immigrant community who needed aid in adjusting to major life changes and so much more. Jeffrey’s social work background combined with his own creative soul makes him a wonderful addition to the Kay & Black team.

In addition, Jeffrey has also always been interested in the craft of language and is a true writer at heart. In his spare time, he works on a fantasy fiction series and now actively contributes copy for Kay & Black social media. These past several years he’s been surrounded by creatives in his life: including designers, copywriters and even printmakers. During this time, he’s been immersed in the process of everything from conceptualization to designing brand identity. This mixed with his ability to make connections that matter helps Kay & Black further their purpose and mission in connecting and coaching talent.

At home in Brooklyn, Jeffrey enjoys spending time in Prospect Park. He is an avid reader, loves having philosophical debates about existentialism, and travels as much as possible. Oh, and he loves riding horses.